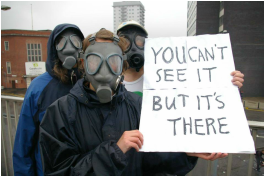 Welcome to the Healthy Air Leicester and Leicestershire (HALL).

Air pollution leads to health problems, particularly for children and the elderly, and is estimated to cause 29,000 premature deaths every year in the UK. The main source of air pollution is traffic. Leicester is one of the most polluted cities in the UK and Leicestershire is one of the most polluted counties. On Saturday 28th February 2015, we launched our Healthy Air Manifesto for Leicester and we are campaigning for the City Council to adopt the measures in our manifesto. We are also campaigning for the Government to electrify the Midland Mainline.

It is vital to life, but the air we breathe is invisible and all too often air pollution is a case of out-of-sight, out-of-mind. At a time when we're all aware of the health impacts of our diet and the amount of exercise we do, air pollution is an invisible public health crisis that costs an estimated £15 billion every year.

Air pollution can be made up of various different substances. In Leicester, the main problem is Nitrogen dioxide (NO2). NO2 is a toxic gas which aggravates respiratory and cardiovascular conditions, like  asthma, and has more insidious long-term health effects. 3% of Leicester City’s population (9000 people) live in the ‘Air Quality Management Area’, that is, in the area where the air quality does not meet EU standards. It is estimated that air pollution causes 250 premature deaths per year in Leicester but the real figure is likely to be higher, as the air pollution is worst in the poorer areas of the city and there is evidence that deprived populations are more susceptible to poor air quality due to its combined impact with other social stressors.

90% of air pollution in Leicester comes from motor vehicles and 60% of that comes from heavy vehicles. Over recent years, there has been some fluctuation of NO2 levels but there has been no discernible fall and in some areas air quality seems to be deteriorating. (Statistics taken from Leicester City’s Air Quality Action Plan 2011 - 2016.) For more information about the problem nationwide, see Healthy Air's website.
Powered by